PC Mark Thomas was nominated after showing  tremendous courage when he was threatened with a knife after finding a high-risk missing teenager in November last year.

He joined officers from across England and Wales at the awards ceremony, organised by the Police Federation of England and Wales, which was also attended by policing minister Kit Malthouse,  shadow home secretary Yvette Cooper and Metropolitan Police Commissioner Dame Cressida Dick.

Earlier in the day, he and his wife attended a Downing Street reception hosted by Home Secretary Priti Patel.

He said: “I felt incredibly surprised and honoured to be nominated and represent Dyfed Powys Police at the awards ceremony. I didn’t feel like I’d done anything special, just my job.

“I felt like I had imposter syndrome. A number of the stories of bravery were quite unbelievable really and received standing ovations from the room.

“It must have been extremely difficult for the judging panel to choose an overall winner.” 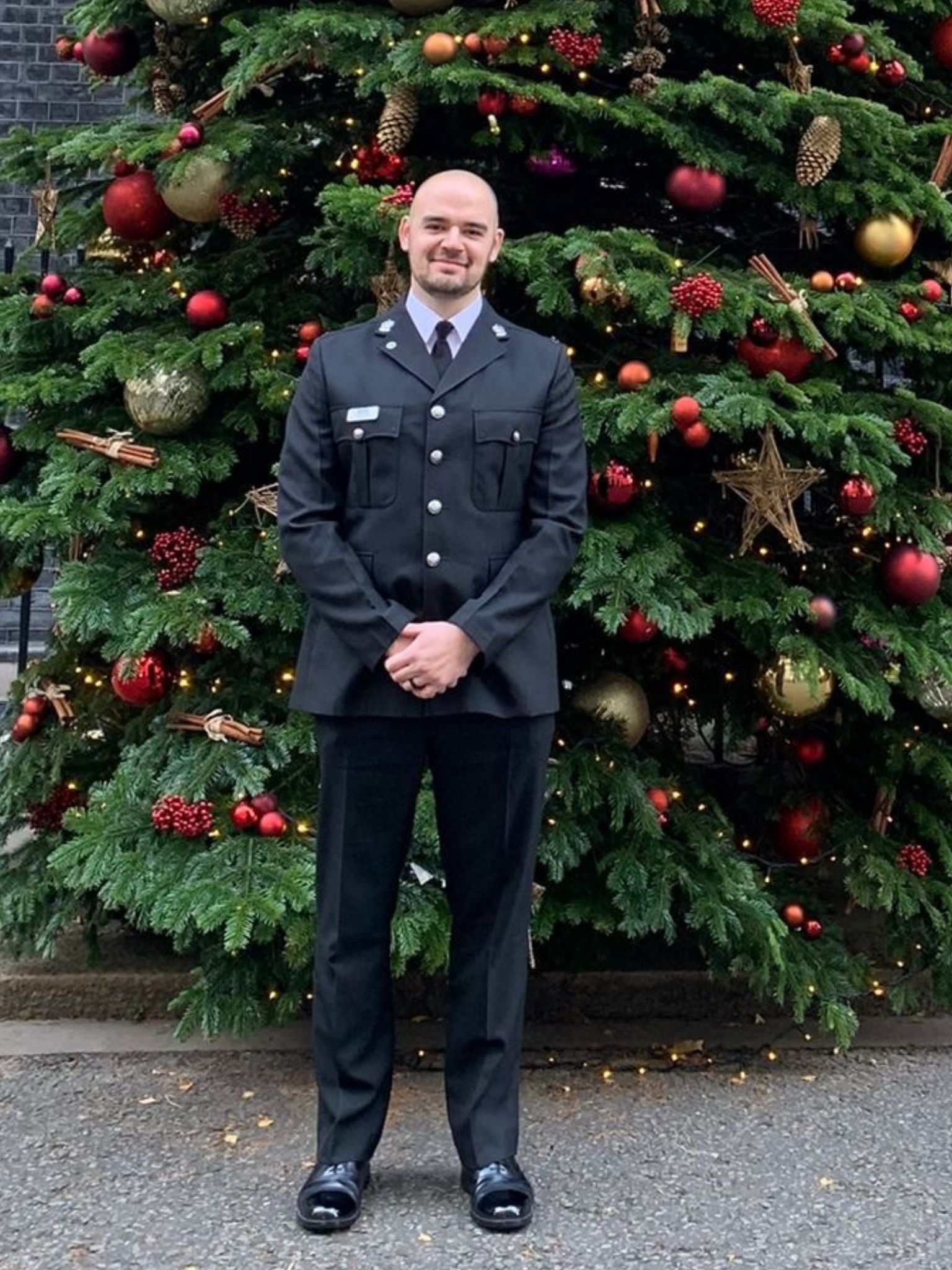 PC Thomas was nominated by Dyfed Powys Police Federation after the incident which began to unfold when he joined the search for a missing 18-year-old who was believed to be walking along the A48 near Cross Hands.

The Roads Policing Unit officer spotted a man matching the description and, fearing for his safety as he was so close to the busy dual carriageway, approached him to check if he was OK.

But, as PC Thomas got closer, the teenager pulled out a knife and attempted to attack him with it.

His visit to London for the awards ceremony included a reception in 10 Downing Street.

He said: “It was very interesting. It’s obviously a building steeped in history so it was good to see behind the doors at what goes on and what it looks like.

“In the room where the morning reception was held there was a set of Olympic medals and the Olympic torch from when London hosted the 2012 games.”

PC Thomas said he did not get the opportunity to speak to the Home Secretary or policing minister but added: “The Home Secretary gave a very passionate speech to the nominees while at Number 10 about how much she and the majority of the British public support policing which was nice to hear.

“It was just nice to be part of a celebration of Policing which you don’t generally hear about during your day to day job.”

The national Police Bravery Awards honour officers from across England and Wales who have performed outstanding acts of bravery while on or off duty.

Four West Yorkshire Police officers who detained two attackers who murdered a man with a samurai sword were named overall winners at the awards ceremony.

The colleagues were honoured for their professionalism during a horrific incident in January 2020 when they responded to reports of a man being viciously attacked outside a pharmaceutical factory in Huddersfield.

The officers – one of whom was in the first two weeks of her career – were confronted by the barbaric sight of attackers hacking at the victim with a sword and knives when they arrived at the scene.

They bravely managed to detain both assailants, despite the offenders still being in possession of the murder weapon and knives.

Prime Minister Boris Johnson praised the “dedication and conscientiousness” of all the nominees and paid tribute to their bravery.

He said: “Acts of bravery in policing are, necessarily and thankfully for us all, commonplace. Every day, local and national media is awash with examples of police heroism.

“Be it confronting dangerous and violent people, rescuing members of the public or working day and night on the most harrowing of cases, bravery is a defining characteristic of the police.

“It is this unflinching bravery, alongside your dedication and conscientiousness, that inspires my steadfast support for the police.

“I am bowled over by the nominees. You are a credit to your forces and your illustrious forebears in policing. I salute each and every one of you.”