Three courageous Dyfed Powys Police officers who tackled an armed man as he walked towards a town centre have been celebrated at the national Police Bravery Awards.

PCs Lucy Morris, Nikita Matthews and Paige Morgan travelled to London where they were joined by fellow nominees from across England and Wales at a special Downing Street reception hosted by Home Secretary Priti Patel. 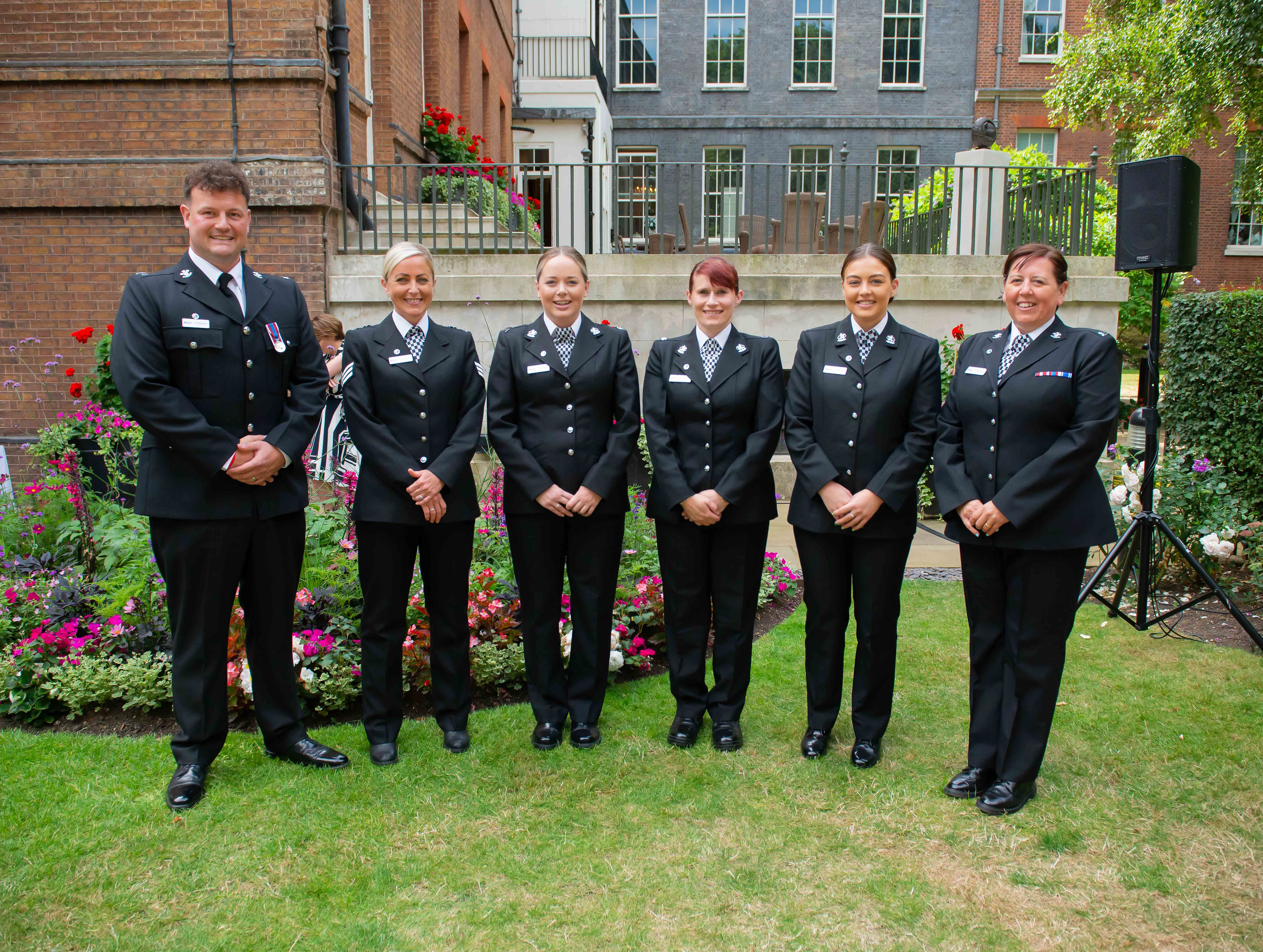 The three Welsh nominees (third, fourth and fifth in the line-up) with their fellow nominees from the other three forces in Wales.

The trio were shortlisted after fearlessly responding to reports that a man with mental health issues was drunk, issuing threats and “messing with petrol”.

A concerned family member made a call to the police explaining there was a man outside their property, acting erratically in possession of an air rifle.

When the three officers arrived at the house in Llandrindod Wells last October, the man pointed the rifle at them and forced them to back off. While attempting to communicate with him, he continued to raise the rifle when they tried to approach.

Members of the public were in the area and the three officers were doing their best to keep them back but the man then began to walk towards the centre of the town.

PC Morris, who is also a Dyfed Powys Police Federation workplace representative, PC Matthews and PC Morgan took the decision to use their police vehicle to control the man. This was done in as safe a way as possible and the suspect sustained a minor leg injury as a result.

Roger said: “I was honoured to attend the Police Bravery Awards with our three incredible nominees. These officers showed composure as well as bravery in dealing with this incident.

“The man was armed with an air rifle so this was potentially an extremely dangerous incident for members of the public, the police officers and himself.

“These officers should be very proud of the way they dealt with the situation and are fully deserving of this bravery award nomination.”

Speaking at the Downing Street reception, Ms Patel told the nominees: “I am delighted to be able to celebrate with you, once again, the incredible courage of a remarkable group of police officers.

“Your work involves an extraordinary degree of sacrifice that should never be taken for granted. These awards play an important part in ensuring your deeds are recognised.

“I would like to thank the organisers of the 2022 awards, the Police Federation, and Police Mutual for their continued support for the event.”

The officers also received warm praise and a message of thanks from Prime Minister Boris Johnson.

He said: “These acts of bravery, honoured here today by your colleagues and the public, are outstanding and in the finest traditions of policing. I salute each and every one of the fantastic nominees at the awards. You are truly the best of the very best.

“It is absolutely right and proper that we honour and celebrate the work of our brave men and women in uniform who work day in and day out to protect the public.

“The progress we are making towards recruiting 20,000 more officers gives me full confidence that together we will make our streets safer. From the bottom of my heart, thank you.”

Speaking at the awards ceremony, Police Federation national chair Steve Hartshorn said: “Tonight, we heard extraordinary stories of bravery, selflessness and acts of courage that are not just part of the job.

“The bravery shown by these nominees is truly outstanding. From putting their own lives at risk to save others, facing violent attackers and terrifying weapons, to rescuing people from perilous situations in fast flowing water or stranded hundreds of feet in the air, they have faced danger head on.”

The annual bravery awards are organised by the Police Federation and sponsored by Police Mutual.

This year’s overall winner was Lincolnshire Police’s PC Steven Denniss who was stabbed as he tackled a double murder suspect he has spotted while off duty and out walking his dogs.