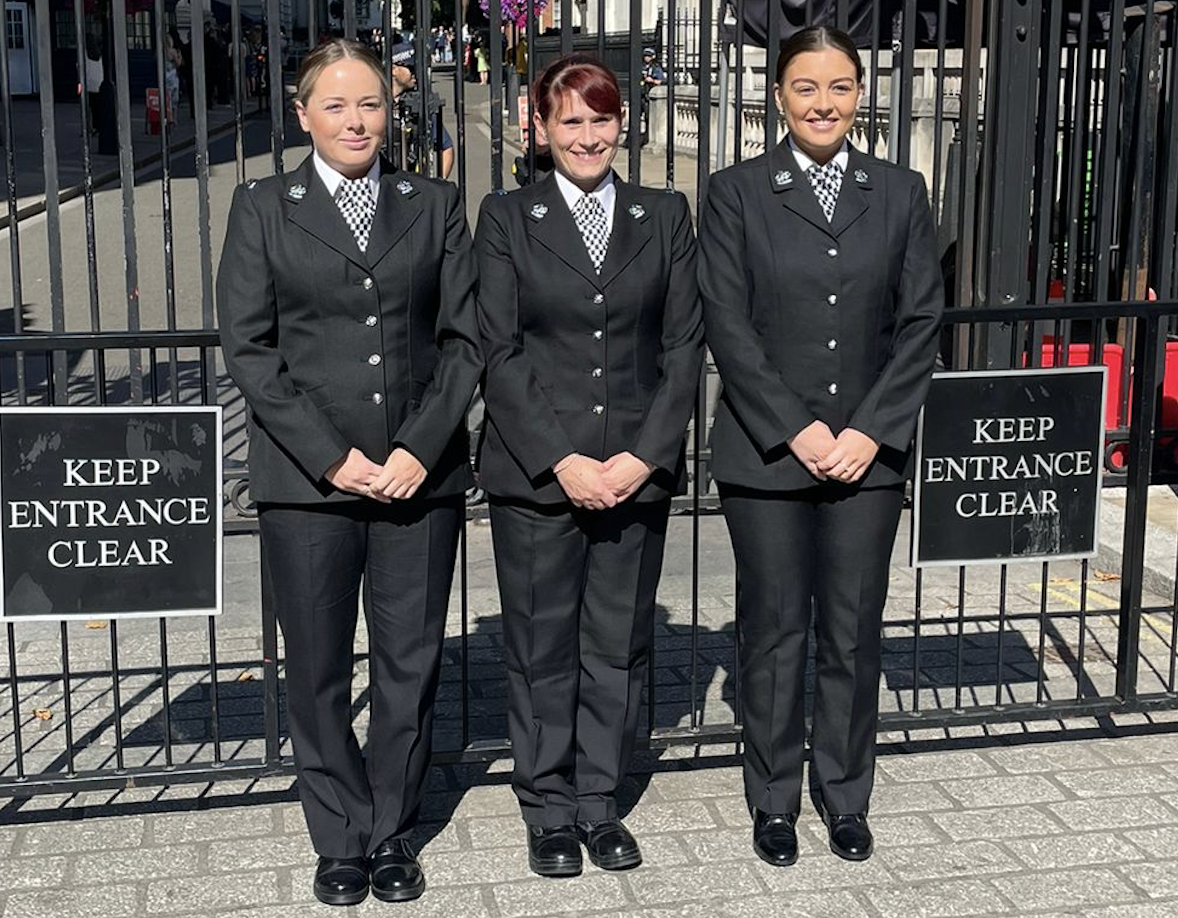 The trio became this year’s Dyfed Powys nominees in recognition for their efforts in protecting the public from a man armed with an air rifle in Llandrindod Wells.

PC Matthews was just 18 months into her service and PC Morgan only seven weeks during the incident in October 2021.

PC Morris, an officer with 16 years’ service, recalls: “We responded to reports that a man with mental health issues was drunk, issuing threats and ‘messing with petrol’. We tried to talk him down and get him to stop, but he was he was walking towards the van and pointing the gun at us every five seconds.

“We were getting closer to the lake in Llandrindod Wells, which is a busy public area. It was around Covid time, so there were people there going for their daily walk with the kids. There were old people about and we had no ARV anywhere nearby.”

PC Morris, who is also a Dyfed Powys Police Federation workplace representative, was forced to back the van up a single-track lane, and radioed colleagues for ideas on how to stop the gunman. One suggestion came back: ‘Use the van’.

The officers accelerated the van from a stationary point and connected with the man, knocking him off his feet and causing him to drop the weapon.

PC Morris explains what happened next: “He stood up as I parked. My adrenaline was just going 100 miles an hour. I grabbed hold and he was fighting with me. Then my student, Paige, who was new in the job at the time, cuffed him perfectly.

“You see on the body-worn video at the end of the incident all three of us just came together and had a massive hug group hug while he was in the van, because it was a really emotional time. And at the awards we all got emotional. I'm not one to show mine but I was ‘belly aching’ and then I started the girls off!”

PC Morris and her colleagues were amazed and humbled to have been nominated for a Police Bravery Award. The modest trio insist they were just doing their job, the same as anyone else, but agree that it was fantastic to get the recognition.

PC Morris added: “I was prouder for the girls than for me because they're so young in service. It was phenomenal to go to Downing Street with all the nominees from across England and Wales – the banter was just so funny. My Dad is a retired copper and was so proud for me. And I got to meet Larry, the Downing Street cat, which was a brilliant little perk.”

They described the evening awards as an “amazing atmosphere” and were chuffed to be congratulated by their Chief Constable Richard Lewis and Police and Crime Commissioner Dafydd Llywelyn.

PC Morris said: “It was a real career highlight that we’ll never forget. Dyfed Powys is the best force in the world to work for. After this incident, the amount of support we had from colleagues, from bosses and across the division was out of this world.”

Dyfed Powys Police Federation secretary Roger Webb said: “These officers showed composure as well as bravery in dealing with this incident. The man was armed with an air rifle, so this was potentially an extremely dangerous incident for members of the public, the police officers and himself.

“These officers should be very proud of the way they dealt with the situation and are fully deserving of this bravery award nomination.”

The Bravery Award for Region 7 (Wales) was won by PC Nathan Davies of South Wales Police who saved a couple from a river during a raging storm.