Remembering fallen officers and their families 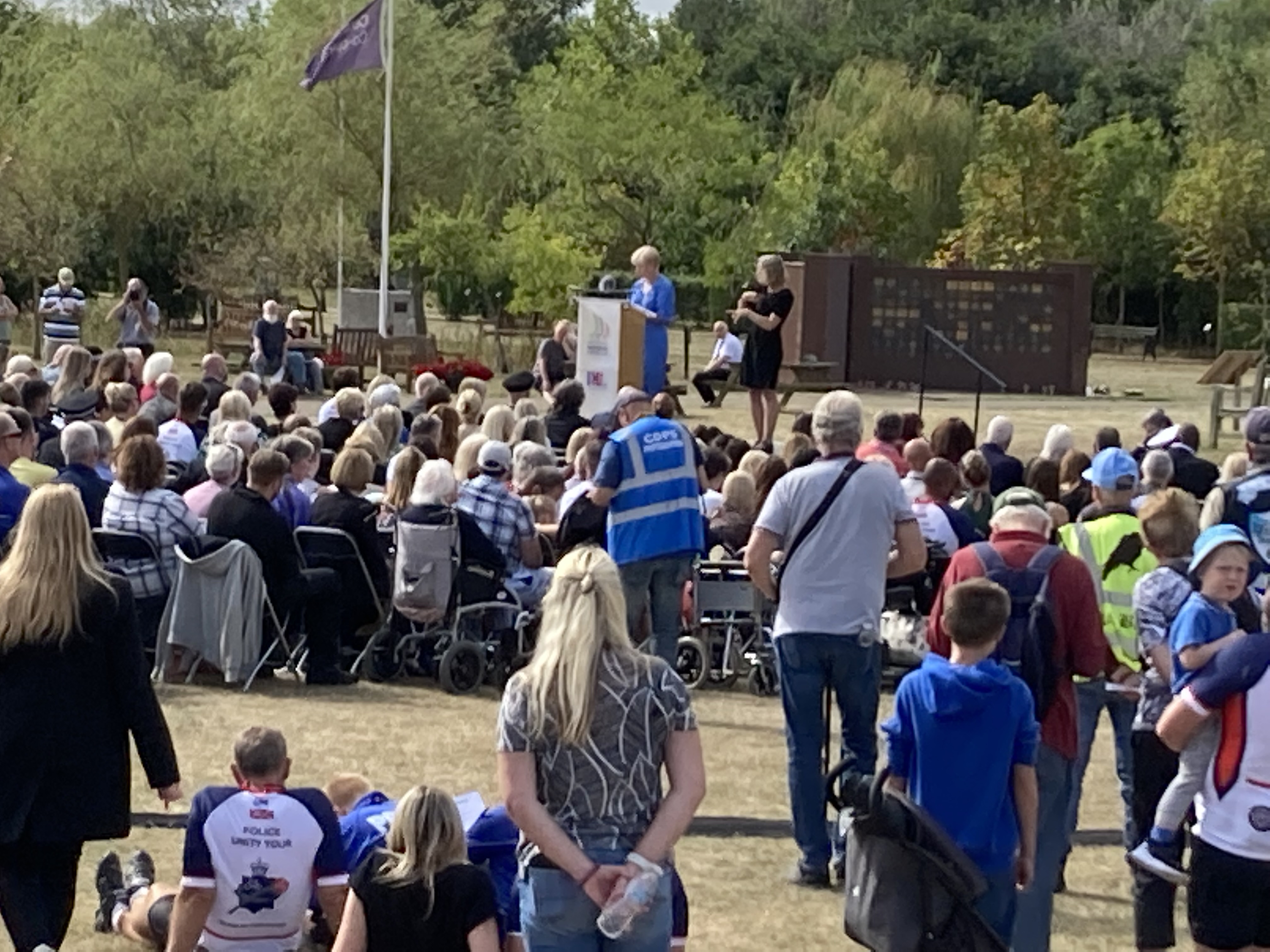 This year’s Care of Police Survivors (COPS) Service of Remembrance took place on Sunday at the National Memorial Arboretum in Staffordshire, with the theme of families supporting one another to heal at its heart.

Those left behind by the death of a police officer in service were reminded that the sacrifices of their loved one will never be forgotten and that officer – and their families – continue to be part of the police family.

The event began as always with the arrival of around the Police Unity Tour cyclists – around 300 of them – including officers, supporters and even a Police and Crime Commissioner – Bedfordshire’s Festus Akinbusoye.

They were joined by the Blue Knights, a fund-raising group of serving and retired police personnel with a motorcycle interest, and at the head of the procession was an American Ford Crown Victoria police car decked out with COPS livery.

The US link was a reminder that the idea of bereaved police families (known as survivors) supporting one another originated from across the Atlantic, while the COPs charity itself was founded by ‘survivor’ Christine Fulton 19 years ago.

Gill Marshall, national president of COPS, spoke of the death of her husband Alan on duty in 2006 and quoted CS Lewis: “He wrote ‘You too? I thought I was the only one.’ This is how friendships are formed.”

Other speakers included the chief executive of COPS, Tim Buckley, and the charity’s chair of trustees, Sir Peter Fahy QPM. The West Midlands Brass Band played throughout the service and there were two songs from singer Diane Whylie.

Emma Fields took the lectern to describe the awful moment on Christmas Day five years ago when the family festivities were interrupted by a knock at the door, and she learned that South Yorkshire PC Dave Fields, her husband, partner of 22 years, and father of their two children, had been involved in a fatal car crash.

“That day we’d watched the kids open presents, had Christmas dinner and I’d kissed him goodbye not knowing it would be for the last time. Then I was a widow, feeling scared and wondering how my life could possibly continue without him.”

Emma spoke movingly about having to break the hearts of her two children by telling them their dad would not be coming home – a terrible experience which others in the audience knew only too well.

Then, amidst the dark days following the funeral, Emma received a letter from the COPS, which she responded to, and she was put in touch with a local ‘survivor’ called Angela.

“It was nice to speak to someone who had been through what I was going through and made me realise that, although hard you could continue to live,” she recalled. Emma also thanked everyone who took part in the Unity Tour, ending with the poignant observation that “loss is forever, but so is love.”

Wreaths were laid on behalf of policing organisations and the service was concluded by families and colleagues of fallen officers placing red roses on the trees representing the police forces of the UK.

Next year’s COPS service of remembrance will be the 20th anniversary event.