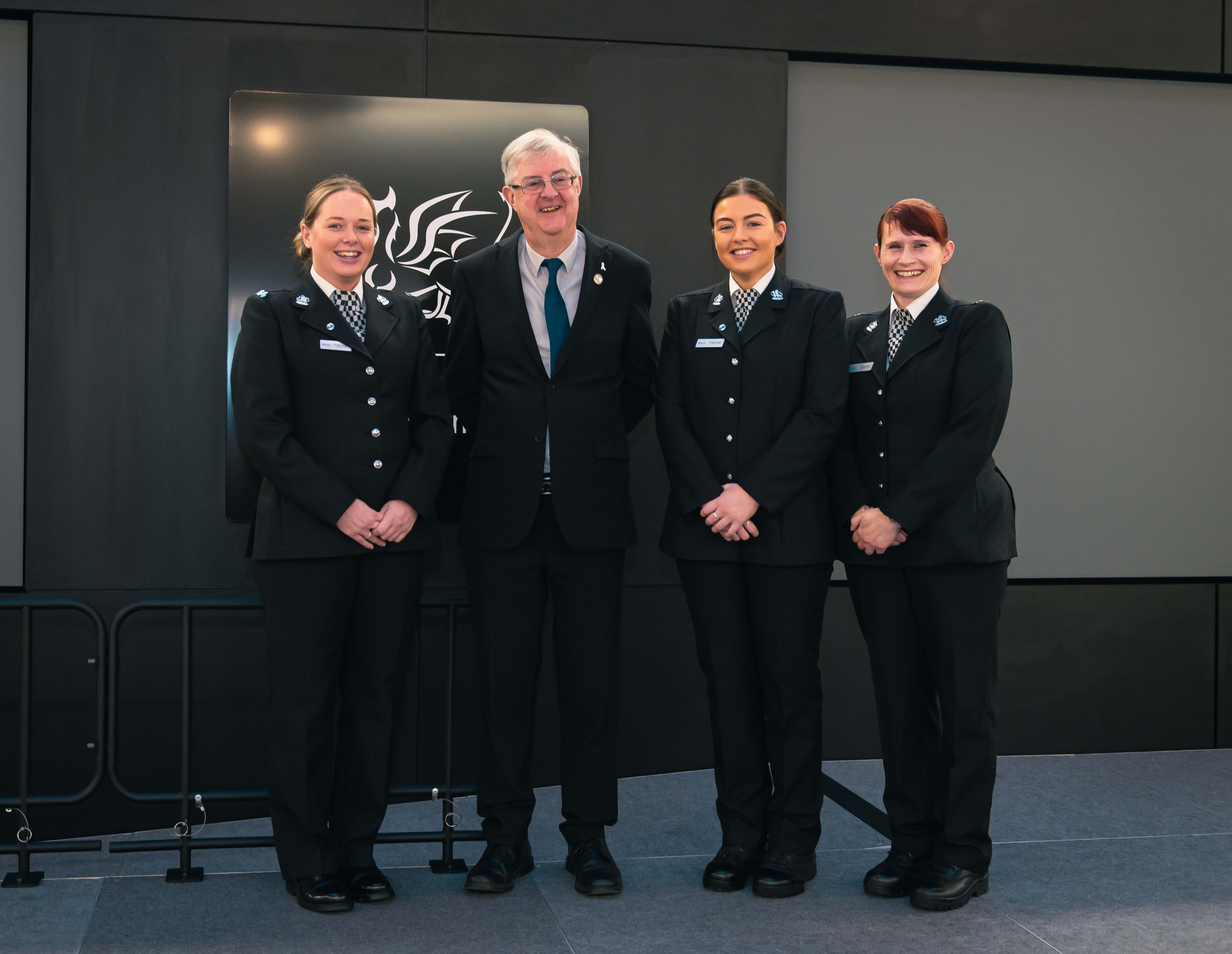 Three courageous Dyfed Powys Police officers who were nominated for a Police Bravery Award after tackling an armed man as he walked towards a town centre have been honoured at a special reception in Cardiff.

Speaking after the reception, PC Morris said: “It was lovely to have further recognition from the Welsh Government on top of the national awards we attended in July.

“The First Minister really listened to our accounts and asked questions about police training and support that no other politician has ever asked us about.

“It is another highlight of my career to add to the others I have had this year alone.

“Nikita, Paige and I are humbled and thankful for the support from the Police Federation.”

Nicky said: “We are extremely proud of the officers from the Welsh forces who were nominated for Police Bravery Awards this year.

“Each of them has shown incredible courage in very difficult circumstances and although they have all played down the parts they played, they are fully deserving of this recognition from the Welsh Government.

“The reception at Cathays Park 1 was a fantastic event and I am so pleased the First Minister took time to meet and speak to the brave officers who give so much to their communities.

“During the reception, the ministers took a real interest in the effects the incidents for which the officers were nominated for the awards had upon them as individuals and how they were subsequently supported.

“It is important that policing feels it has the support of the Welsh Government and events like this show the unique and vital role our members play in Welsh society is recognised by our elected leaders.”

The three Dyfed Powys officers were nominated for showing quick-thinking as well as bravery when they responded to reports of a man with mental health issues issuing threats and “messing with petrol”.

When they arrived at the scene in Llandrindod Wells the man pointed an air rifle at them and forced them to back off.

Members of the public were in the area and the three officers were doing their best to keep them back but the man then began to walk towards the centre of the town.

The three PCs took the decision to use their police vehicle to control the man and carried out their manoeuvre in as safe a way as possible so the suspect sustained only a minor leg injury as a result.

They were honoured at the Police Bravery Awards in London in July.

Along with nominees from forces across England and Wales, they attended a Downing Street reception hosted by the then Home Secretary Priti Patel before an evening awards ceremony. The Welsh regional award was presented to PC Nathan Davies of South Wales Police.

The Police Bravery Awards are organised by the Police Federation of England and Wales.