Dyfed Powys Police Federation secretary Roger Webb says he’s delighted a campaign for a posthumous award to honour fallen officers has gained the support of a number of Westminster MPs.

Now Roger has called on ministers to “make the Elizabeth Medal a reality” after it was debated in the Houses of Parliament for the first time.

The Medals for Heroes campaign was officially launched by the Federation, the Police Superintendents’ Association and the Prison Officers’ Association in April.

The campaign is calling for recognition for emergency services workers, including police officers, who make the ultimate sacrifice in the line of duty.

The award would be called the Elizabeth Medal and would be similar to the Elizabeth Cross, which is awarded to the bereaved relatives of members of the British armed forces killed in action.

Roger said: “I’m delighted that the Elizabeth Medal has been debated in Westminster, though for me and everyone else in the policing family we’re not sure what there is to debate.

“We all want the medal to be introduced to recognise the sacrifice of all too many of our colleagues.

“It feels like a significant moment in the campaign, to have it publicly acknowledged, discussed and supported in Parliament.

“Now it’s time for the Government and ministers to make the Elizabeth Medal a reality. It would mean so much to so many.” 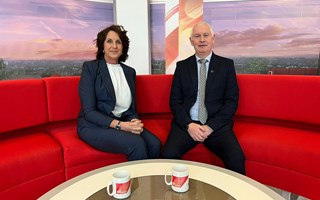 The backbench debate was secured by Wendy Chamberlain,  the Liberal Democrat spokesperson for Work and Pensions, and Chief Whip.

Moving her motion, Ms Chamberlain told MPs: “We have long-standing awards for gallantry, sacrifice and service, for those who have given to our country in all sorts of different ways. It is right that such service deserves recognition, and the recipients and their families are rightly proud.

“But sadly, there are those who have equally served their country and have made sacrifices who are not being recognised as they should.

“No reward or recognition can replace the loss of a loved one, but if we can go some way to make them feel like that loss has been recognised, it is very important.”

She spoke of how she joined Lothian and Borders Police in 1999, serving for 12 years as a police officer. Her father and her husband were also police officers. Indeed, her father also won a Royal Humane Society award in 1983 for rescuing a man from drowning in a dock.

The Medals for Heroes campaign has also been supported by Bryn Hughes, whose daughter PC Nicola Hughes and her Greater Manchester Police colleague PC Fiona Bone were murdered 10 years ago, and the families of fallen officers across the UK.

“There are many families with ongoing campaigns for justice,” Ms Chamberlain added, “That is why I am here with other members, calling on the Government to institute a new award for emergency service workers.

“It is part of the royal prerogative to determine honours and awards, but the Prime Minister does give advice on such matters, so I would argue that it is entirely within the Government and Prime Minister’s purview to put forward the recommendations, endorsed not only by members in this place but professional bodies across the country, for a new award.”

PC Ged Walker, a dog handler with Nottinghamshire Police, was also remembered during the debate.

On 7 January 2003, PC Walker was dragged 100 yards and fatally injured by a stolen taxi as he reached into the vehicle in an attempt to remove the keys from the ignition. He died in hospital two days later from serious head injuries. He was survived by his widow and two children.

Darren Henry, Conservative MP for Broxtowe, said: “PC Walker is a shining example of why an award, such as a medal, should exist. He and all other police officers put their lives on the line every day they go to work.

“Officers who have lost their lives protecting their communities must be recognised in such tragic circumstances.”

Holly Lynch, Labour MP for Halifax and Shadow Minister for Security, added: “So often officers are out there on their own. There is no such thing as a routine call in policing - the circumstances can change in an instant.

“This medal will be one step towards understanding the contributions they make, the risks that they take, and what we really owe to the families of those who have made the ultimate sacrifice in the line of duty.”

Johnny Mercer, the Minister for Veterans’ Affairs, concluded the debate with a pledge to support the campaign.

He said: “I will take this forward and hope that this year, with a bit of drive and energy, we can bring the campaign to a conclusion with which we are all happy.”